Home » Our Blog » Can I Get a Ketamine Infusion for Pain Control? 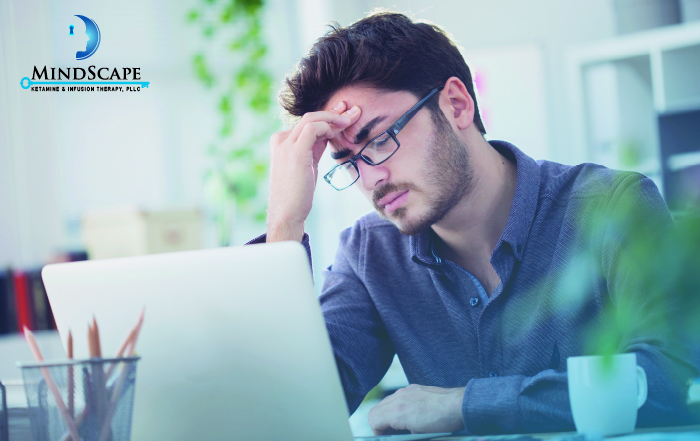 Can I Get a Ketamine Infusion for Pain Control?

According to the CDC, more than ⅕ of all adults in the US suffer from chronic pain, and of those, nearly half experienced pain that limited life or work activities over the last three months. And although you might picture chronic pain as something that only affects the physical body, sometimes it can exist all in your head. For people suffering from the excruciating pain that accompanies chronic migraine headaches, finding a fast and effective pain treatment is crucial.
If you’re one of the 4 million people suffering from near-daily migraines, it might be time to consider getting a ketamine infusion for pain control.

You may know ketamine as an animal tranquilizer or street drug, but as people so often are when it comes to the dissociative anesthetic, you’d be only half right. Although it’s been used throughout history in veterinary medicine and has the potential for abuse (like any other drug) when used improperly, ketamine’s history and usage are much more interesting than the rumors illustrate.
Ketamine was first synthesized in 1962 as a surgical anesthetic and was soon favored over comparable medications at the time for its short onset of action and desirable behavioral effects. The drug received FDA approval in 1970 for the induction and maintenance of surgical anesthesia. More recently, ketamine has been gaining notoriety for its ability to offer symptom relief for patients dealing with a myriad of mental and physical conditions: chronic pain, treatment-resistant depression and anxiety, obsessive-compulsive disorder, and PTSD, among others.

How Does Ketamine Work?

Ketamine is an NMDA receptor antagonist, meaning the drug blocks neurotransmitters to pass through to the next neuron. This action creates several interesting medical effects, but in the context of treating pain, its effect on dorsal horn neurons is among the most promising. Ketamine causes analgesia by preventing central sensitization in dorsal horn neurons. Or more simply, ketamine interferes with the transmission of pain by preventing the spinal cord from sending an overwhelming number of pain signals to the brain.

What are Therapeutic Ketamine Infusions?

When administered for a reason other than the induction or maintenance of general anesthesia, the dose for a ketamine infusion is referred to as a sub-anesthetic dose. Specific doses administered will vary depending on the ailment being treated:

Low-dose ketamine infusions generally begin near 0.5 mg/kg/hr, though the dose may be adjusted based on the patient’s response. The initial treatment protocol involves between one and six infusions administered over the course of several weeks, and maintenance infusions will usually be conducted every three to five weeks following the initial treatment series.
A low-dose infusion appointment will last roughly one hour—40 minutes of active infusion plus 20 minutes of active recovery—before the patient is released to go home. Low-dose ketamine infusions are prescribed for:

High-dose ketamine infusions for acute pain begin at about 1 mg/kg/hr and, again, might be adjusted depending on patient response. This treatment protocol is more fast-paced, with five initial infusions administered every day or every other day, followed by maintenance infusions every six to eight weeks as the patient needs them.
An appointment for a high-dose ketamine infusion will last significantly longer than its low-dose counterpart. Of the six hours spent in this appointment, four hours will be spent in active infusion and two hours in active recovery. This dose is used to treat:

As a sedative and analgesic, ketamine can treat pain for a variety of conditions, but among the most interesting is chronic migraines. These debilitating “headaches” are the third most common and the sixth most disabling illness in the world, causing more than 90% of sufferers to be unable to work or function properly while having an episode. For this fact alone, finding a cure for migraine pain is imperative, but intravenous ketamine infusions may be able to provide an answer.
In a study published by The Journal of Headache and Pain, all subjects who underwent ketamine infusion therapy for chronic migraine pain reported feeling significant pain relief for at least eight hours. Some patients even report symptom relief duration lasting as long as three months. This is particularly good news for anyone who has ever suffered from a migraine headache and particularly those who experience them chronically. Some chronic migraine sufferers will become resistant to painkillers as their illness continues, so ketamine is especially helpful since its mechanism of action is entirely different from traditional pain medicine.

Will IV Ketamine Work for Me?

Although doctors treating chronic pain conditions and various mental health disorders speak about therapeutic ketamine as some sort of wonder drug, it’s important to remember that the drug won’t have the same effect on everyone.
If you’re considering ketamine infusions to help manage chronic pain, it’s important to consult with your doctor, especially if you are affected by any of the following:

Patients experiencing these conditions are at higher risk for complications and long-term side effects with ketamine and ketamine-derived drugs and should notify their doctor of any pre-existing conditions before beginning treatment. However, many patients find significant relief when they receive their first ketamine infusion for pain control.