Home » Our Blog » How Long Does Ketamine Treatment Last? 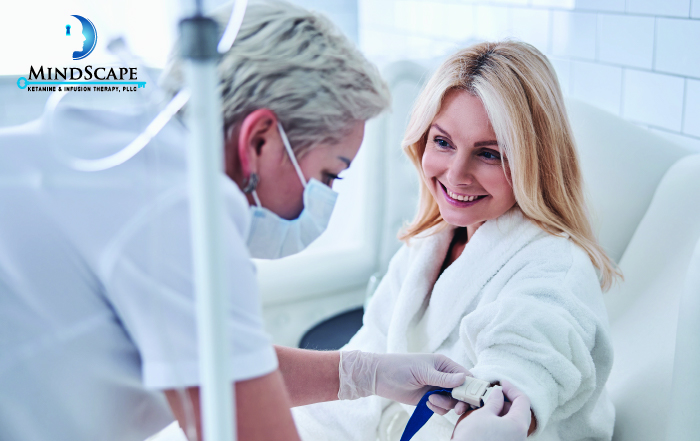 How Long Does Ketamine Treatment Last?

When you imagine yourself seeking out treatment for depression, what do you picture? Taking pills that make you feel too lethargic to rouse up the energy to be depressed? Sitting in a room across from a doctor who keeps asking how you’re feeling when it’s obvious how you’re feeling? Going outside for the fresh air and sunshine family members keep promising will change your mood in no time? What about going to a quiet, relaxing doctor’s office to receive an IV ketamine infusion? The last one is unlikely, but psychiatrists, doctors, and researchers are hoping to change that.
Ketamine is fundamentally altering the way we treat depression and other mood disorders, and it is the only fast-acting treatment for depression available today. But what exactly is ketamine? How does it work? And most importantly, how long does ketamine treatment last?

What is Ketamine Infusion Therapy?

Initially formulated for use as an essential surgical anesthetic, IV ketamine is growing increasingly popular as an off-label therapeutic intervention for treatment-resistant depression. The drug is being increasingly used by the psychiatric community because it manages major depressive symptoms more effectively than traditional selective serotonin reuptake inhibitors (SSRIs), like Zoloft and Lexapro.
Treatment protocols will vary from patient to patient, depending on the scope and severity of their symptoms, but the initial treatment course generally consists of a series of six infusions administered over several weeks. Upon completion of the initial infusion sessions, healthcare providers may recommend one or more maintenance infusion sessions, or booster infusions, to be conducted at regular intervals.

What Do IV Ketamine Infusions Treat?

Although only FDA-approved for use in the induction and maintenance of general anesthesia, ketamine is being used off-label in the treatment of mood disorders and chronic pain conditions, including:

How Does Ketamine Work?

Your brain is filled with billions of nerve cells, called neurons, that are responsible for passing chemical and electrical signals back and forth to process information or direct cellular activity within the body. The chemicals carrying these signals are called neurotransmitters, and there is one specific neurotransmitter that ketamine-related research has focused on: glutamate.
Glutamate is used by neurons to communicate with one another and is thought of by psychiatric researchers as a sort of “neural fertilizer,” aiding in the generation of new neural connections. It works by attaching to NMDA receptor sites—which act as gates that neurotransmitters must pass through in order to proceed to the next neuron.
NMDA receptors are also critical to neuroplasticity, or how adaptable our brains are. This is important for treating depression because NMDA receptors help facilitate the formation of neural paths, including those that were destroyed by disease or injury.
Ketamine is an NMDA receptor antagonist, which means that it inhibits or blocks NMDA receptor sites from allowing neurotransmitters to pass through them to the next neuron. By inhibiting the ability for anything to pass through the receptor site, glutamate is unable to pass and is observed in elevated concentrations between neurons.
This increase in available glutamate is thought to facilitate the regeneration of neural pathways, allowing neurotransmitters, like serotonin and dopamine, to move through the brain more easily—alleviating symptoms of depression.
If this explanation feels confusing or unsatisfying, don’t feel bad. Ketamine targets multiple brain systems at once, which makes pinpointing exactly how ketamine treats depression very difficult—even for doctors.
Despite the lack of complete clarity in how it treats depression, ketamine’s efficacy in symptom management is undeniably clear.

How Long Do Ketamine Treatments Last?

Ketamine is generally eliminated from the body within ten to twelve-and-a-half hours depending on how it was administered, among other factors like body mass, metabolic rate, and drug dosage. The effects of ketamine, however, can last for weeks or even months.
Unlike traditional selective serotonin reuptake inhibitors (SSRIs) used in treatment for depression, ketamine has a noticeable physical effect within seconds when administered intravenously, and its onset of action (how long it takes to feel a drug’s therapeutic effects) is just hours. This is a vast difference from SSRI medications, which can take weeks or months to provide a therapeutic benefit to patients. The speed at which the drug starts working is not its only benefit though.
SSRIs take weeks to begin working, and once a patient quits taking the medication, its effects will begin declining rapidly. With the exception of Prozac, all major SSRIs are eliminated from the body within a week, leaving patients to experience discontinuation symptoms, including nausea, changes in sleep behavior, difficulty coordinating speech and balance, mood swings, and even suicidal ideation. With an onset of action that can be delayed six weeks or more and such a short-lived therapeutic effect, SSRIs are not a practical option for most patients who cannot wait months to start feeling the medication’s effects.
Using ketamine for depression appears to be a one-hundred-eighty degree turn from the widely accepted SSRI medications. The effects of ketamine, when given in therapeutic-dose infusions, can be felt almost instantaneously with patients self-reporting symptom relief within hours of the initial treatment. In addition to an exponentially faster onset of action when compared to SSRIs, ketamine’s therapeutic benefits have been observed as lasting for up to three months following a single dose.
The quantity and frequency of infusions will vary from person to person, depending on the severity of their symptoms, other medications they may be on, as well as their response to the treatment. But generally, when using ketamine for depression, treatment protocol dictates the following:

Each patient may react differently to the physical and mental effects of ketamine, which is why we closely monitor our patients during and immediately following infusion sessions. However, most patients receiving low-dose infusions of ketamine for treating depression experience the following:

Ketamine is a dissociative anesthetic, leading patients to experience a distortion of sights, colors, sounds, self, and even their environment. Additionally, patients may have the sudden urge to relive memories, emotions, and stories, which might contain unprocessed memories or feelings. Reliving these experiences and feelings allows patients the opportunity to process them and hopefully, alleviate some of the mental stress contributing to their depressive state.

Is Ketamine Infusion Therapy Right for Me?

With its quick onset of action as compared to other drugs, ketamine could literally prove to be a life-saving drug for patients with treatment-resistant depression and thoughts of suicidal ideation. If you’re experiencing symptoms of depression and haven’t observed meaningful improvement in their symptoms with traditional medications, ketamine may be able to reduce suicidal thoughts and provide hope that there is life on the other side of depression.

At Mindscape Ketamine & Infusion Therapy, our mission is to provide customized ketamine therapy to our patients for treatment of various chronic pain and mood disorders while being mindful of their emotional, mental, physical, and financial needs. Through this innovative way of treating depression, we hope to see patients reap the benefits of ketamine therapy and see this medication as a tool to help them lead happy, thriving lives.
If you are currently suffering from treatment-resistant depression, anxiety, or any other mood disorder, our professional staff is ready to help you take control of your mental and physical health. For more information about how long ketamine treatment lasts, visit us online or contact us today.
If you or someone you know needs help today, you can find help at the Crisis Text Line and the National Suicide Prevention Lifeline. They’re free and available 24/7:

If you or someone you know need help right now, call 911 or go to the closest emergency room.